Kimola Newsletter | Cognitive 10#: The year of what is real. 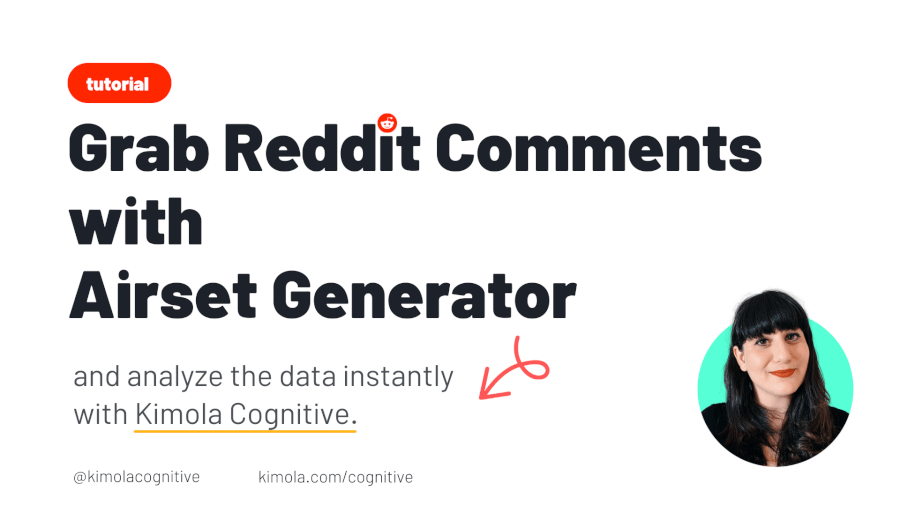 We all know that when we need to set a data-driven strategy, there are thousands of comments on any topic on the internet. One of these channels is on Reddit. Reddit, which has been in our lives for many years, is much more than a social media platform and is very popular around the world. There are many opinions on every subject you can think of, expert or not. So, your target audience is there too! This makes it inevitable to analyze Reddit comments.

🤔 We know you're thinking, "How are we going to get and analyze thousands of reviews?" Here's what you need to do:

🤞 Obtaining Reddit comments with Kimola Cognitive's browser extension: You can watch the YouTube video where we explain how to create a dataset from Reddit comments using Airset.

🥳 Analyzing 1,000 Reddit comments you have captured with Airset in seconds with the "Hate Speech Detection" or "Sentiment Classifier" model, which is one of the pre-trained machine learning models, by simply dragging and dropping. You can sign up and create a 7-day free trial to analyze Reddit comments!

Point-E can make 3D models from texts in seconds.

Technology continues to affect every aspect of our lives, and many things that could not be done in the past can now be done in a much shorter time thanks to technology. In this context, Google is developing an artificial intelligence model that makes it easier to read doctors' hard-to-read handwriting. Google announced at its annual conference in India that it is working with pharmacists and aiming to create a tool that can decode messy medical notes in Google Lens. This feature, which will be available in Google Lens, will allow users to take a photo of the recipe or upload it from their photo library.

The AI correctly guessed the winner of the World Cup.

The 2022 World Cup caught football fans on the screen for a while and officially ended with the Argentina-France match last week. In penalties, Argentina beat France and won the World Cup. EA Sports, an important name in the game world, came to the fore with an important development after the tournament. The company's artificial intelligence system called "HyperMotion2" simulated the matches one by one, predicting that Argentina would be the winner of the World Cup. That's what happened. France, which was shown in the top three by artificial intelligence, finished the tournament in second place. On the other hand, according to artificial intelligence, Brazil, which should have been Argentina's opponent in the final, was eliminated in the quarter-finals.

Amazon, one of the largest shopping platforms in the world, works with many robotic arms in its warehouses. However, these robotic arms have difficulty in reading the barcodes they read, and another problem arises, especially in the placement of their oddly shaped barcodes. That's why Amazon plans to stop using barcodes. Instead, an artificial intelligence-assisted camera system was developed that could recognize it from the product images and sailor tapes in its warehouses. With this change, robots will be able to directly receive and process their products without the need to scan their barcodes. Thus, products can be delivered to customers much faster.