When Oscar Wilde wrote “Women are meant to be loved, not to be understood” in his story, A Sphinx Without a Secret, he probably didn’t have any data about women. Well, we do.

We created an audience with 10.000 people who engaged with Tinder on social media to understand the women community in dating better and deeper. 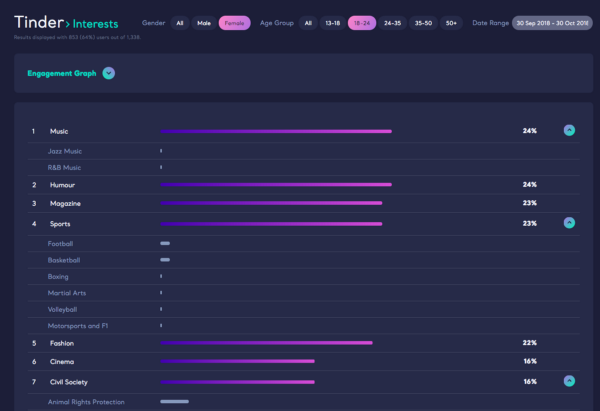 Women who engage with Tinder between 18–24 are fans of music, in general, they have a special interest in R&B music. Also, their favorite 3rd and 4th brands are Spotify and Apple Music.

It’s not hard to say that everybody needs a good laugh in these days; humor seems to have a good effect on them since they have Humor in their interests and their favorite TV Shows genre is Comedy too. Boys, hint here, don’t miss this.

Here is a little surprise; they are into boxing, martial arts, and volleyball. Also, talking about Movies and Animal Rights Protection might have a good start for a small talk since they’re into Civil Society and seem a little bit romantic. 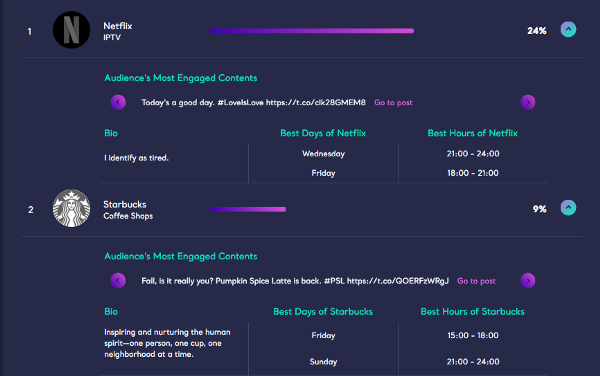 We would recommend a Netflix and chill hang out with coffee since their favorite brands are Netflix and Starbucks. If you’re not interested in Netflix, you always have the chance to put some music.

“Man she knocked me out the way she wears her hair You upset me, baby, yes, you upset me baby” BB King

Women who engage with Tinder between 24–35 have more interest in Sports, but not just Football and Basketball, they have a special interest in Rugby and Tennis. It’s not a surprise that as we grow up, our taste of music widens too. Comparing to 18–24, women between ages 24–35 like blues and jazz music. It’s not hard to say that women in dating between 24–35 ages are more serious about the world as they are engaging with posts about child abuse, sexual harassment cases, and technology news.

Also, let’s take a look at one of the latest post they engaged and understand what it means;

Guys; these women are telling you not to #swiperight only because you like how they look. (Got what we did in the headline? Cheers!)

As expected, women between ages in 35–50 are not that active in dating community, but still, we managed to get some useful insights about them.

They are into classical music, as you can understand it from the headline, Salut d’Amour, which is a musical work composed by Edward Elgar in 1888, originally written for violin and piano.

The differentiation in sports interest comes with Yoga and Pilates, so it’s not hard to say that they care about their health, more than younger ones. Also, they are more interested in Civil Society, the latest in Health Issues.

They are also into Textile and Clothing category in brands, but the Oscar goes to Amazon.com for taking the 2nd place in most engaged brands, considering that they are also interested in E-shopping, this isn’t a shock. 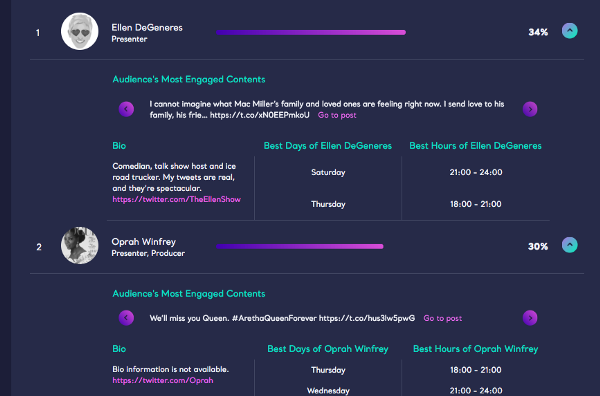 The Celebrity Affinity tells us that Ellen Degeneres, Oprah Winfrey and Jimmy Fallon is taking the lead. The post of Ellen about the death of rap singer Mac Miller (who died in his 26, unfortunately) and the post of Oprah Winfrey about Aretha Franklin has gained a lot of interactions.

35–50 women are more into themselves and spiritual stuff, so if you don’t have something interesting to talk, you can’t get them out of their shells.