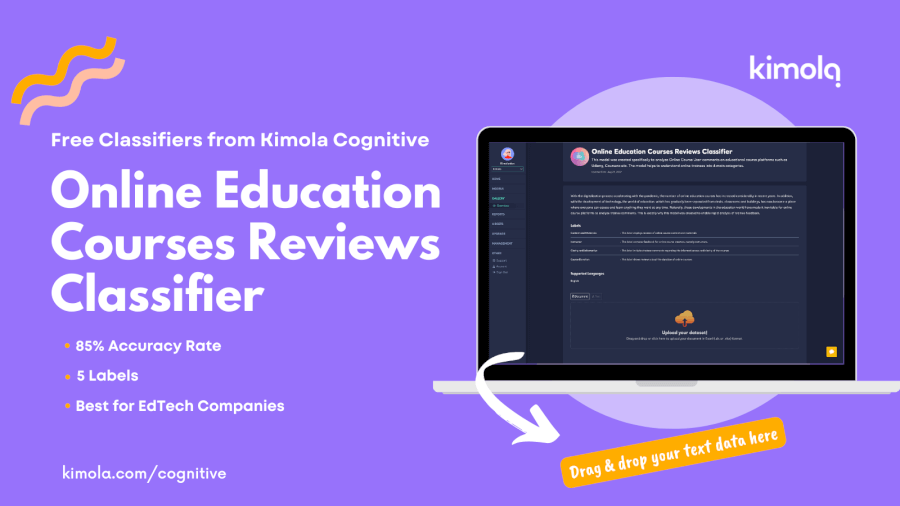 Scrape consumer conversations with Kimola Cognitive's browser extension and analyze them by classifying them with the new machine learning model created by Kimola Cognitive for the world of educational technologies! You can sign up from this link to experience Kimola Cognitive, where you can automatically classify consumer opinions with a simple drag and drop.

About Our New Machine Learning Model:

With the digitalization process accelerated by the pandemic, the number of online courses has increased considerably in recent years. In addition, with the development of technology, the world of education, which was gradually separated from desks, classrooms and buildings, has now become a place where everyone can access and learn anything at any time. Naturally, these developments in the education world made it inevitable for online learning platforms to analyze user comments. This is exactly why this model was created to quickly analyze online course feedback. 🙌

💎 In this model, the content of 5 tags was taught to artificial intelligence to classify user feedback on online education platforms such as Udemy and Coursera. In short, your data is classified with the tags "course duration", "instructor", "content and material", "clarity and informative", and "other" using a simple drag-and-drop method.

💎 Manually tested by our data analysts, the model has an accuracy rate of 85% in English.

Inspiration out, AI in!

With flamboyant performances and costumes, the Eurovision Song Contest is probably one of the weirdest shows to grace our screens. But can machines understand and provide such a unique human experience? The answer is in AI Song Contest, a Eurovision-inspired music competition where all the songs are written by artificial intelligence. This year, 46 groups participated in the competition, which has been held since 2020. The 15 teams that made it to the final met in Liege, Belgium. In addition to musicians, data scientists and software developers from all over the world took part in the teams for the songs prepared by artificial intelligence. Of course, we can't wait for inspiration for a machine to produce these songs. For a good song produced by artificial intelligence, scientists and musicians need to teach the machine the necessary algorithms and musical ideas after months of work.

Google has developed artificial intelligence that transforms the sentences we write into 3D objects.

Artificial intelligence that can convert text to video: Make-a-Video

Digital images consist of a fixed number of pixels in a two-dimensional grid. AI super-resolution uses machine learning (ML) algorithms to infer from an original image way that more pixels may be added to improve that image in some way.  Basically, the technology increases the resolution by creating a more pixelated version of the image that can offer more detail. For example, many televisions, for instance, may be able to display a grid of 3840 x 2160 pixels, sometimes called 4K (an approximation of the horizontal number of pixels) or ultra-high definition (UHD). Many TV signals, however, are broadcast only with grids of 1920 x 1080 pixels, also known as 1080p. AI algorithms convert each pixel in the 1080p signal into a grid of four pixels, making the image quality more detailed. These algorithms provide higher resolutions that may be required for engineering, construction, surgery, and other applications that rely on cameras to gather important details.