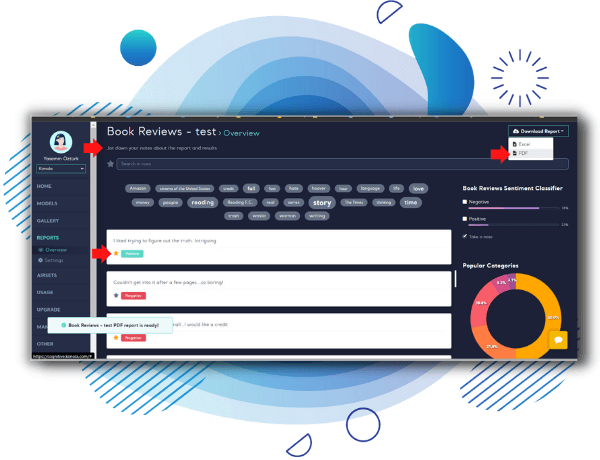 We know that reporting the data you analyze is not easy. That's why our product development team is constantly working to improve the Cognitive Reports for your convenience. Let's see what we've added this time:

You can now download the outputs of your analyzed data as a PDF by clicking the "Download Report" button in the upper right corner of the Kimola Cognitive Report page.

Would you like to add content to the report that supports your analysis findings from consumer data? You can now favorite some content, filter by favorites on the Kimola Cognitive Report page and pin this favorite content to your PDF reports.

📝 Take a note on PDF reports:

It is now possible to add notes on your reports about the results of your consumer data that you have analyzed in Kimola Cognitive.

OpenAI announced that DALL-E 2 users would be able to edit human faces using its AI-powered rendering system. The feature was previously banned for fear of abuse, but in an email to DALL-E's millions of users, OpenAI said they've improved their filters to remove images containing "sexual, political and violent content." This arrangement will allow users to edit images in a number of different ways. For example, users can upload someone's photo and create variations of the image or edit certain features, such as changing someone's outfit or hairstyle. This will undoubtedly be beneficial for many users in the creative industries, from photographers to filmmakers.

🎥 Stock photography platforms have announced that they do not accept AI-powered artworks!

🤖 Google has developed an artificial intelligence tool that can detect the smell.


The TV show “Person of Interest”, which aired on the US channel CBS years ago, became a reality. Researchers at the University of Chicago have developed a new artificial intelligence algorithm that predicts crime in 1000-square-foot areas by learning patterns of time and geographic location from public data on violent and property crimes. Analyzing crime data, artificial intelligence was able to predict the type and location of possible crimes with up to 90% accuracy next week. The technology was demonstrated in eight major US cities, including Chicago, Los Angeles, and Philadelphia.
Latest