Insights of Crowdfunders: How to Create A Successful Crowdfunding Campaign? 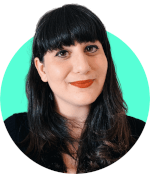 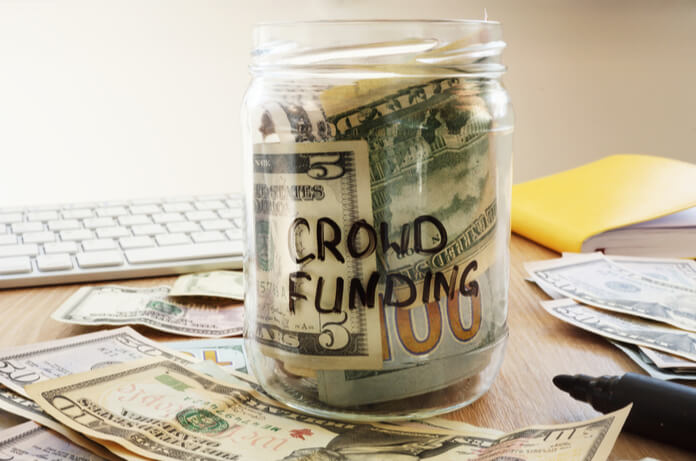 Crowdfunding is the form of financing a project or initiative by collecting small amounts of money from many people over the Internet. Crowdfunding could be an alternative financial tool for startups to raise capital.

If you need to raise funds from donors, you need to study them, respect them, and build everything you do around them. - Jeff Brooks

Here's What You Can Learn About Crowdfunding Demographics According to Kimola’s last quarter data.

Let’s look at crowdfunder insights; what they like, which blog they follow, which celebrities they are influenced by, and what gets their interest. We created a crowdfunding audience with 10.000 people who have engaged with, and/or followed crowdfunding accounts of Indiegogo and Kickstarter. We have examined their behaviors from the last quarter for this analysis.

Thousands of people invest in crowdfunding websites such as Kickstarter and Indiegogo, to catch successful campaigns. 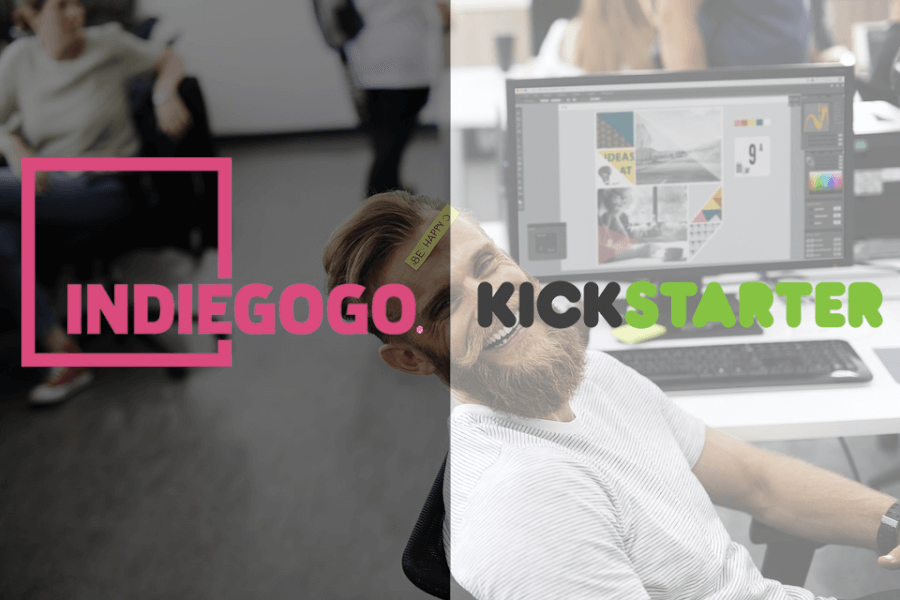 Kickstarter, the biggest crowdfunding platform, is almost synonymous with crowdfunding. More than 160,000 projects with $4.2 billion have been successfully funded on the Kickstarter crowdfunding site since 2009.

Indiegogo, founded in 2007, started as a crowdfunding site initially focused on cultural projects. More than 235 countries and with 12 million backers, it’s one of the biggest crowdfunding platforms.

Dominated by males (61%), more than 50% of the audience is 24 to 35 years old. 11% of males are 50 years or older while the ratio of females from the same age group is almost half of it. When we compare males and females of the audience, both genders’ dominant age range is 24 to 35.

Crowdfunding audience is dominated by males, and amongst our targeted audiences, it’s the one with the highest percentage of young adults. While women are more likely (by a small margin) to support crowdfunding projects, men back more often and support a wider variety of campaigns. Younger men, especially, have shown a willingness to fund projects related to new products or inventions.

Crowdfunding audience is composed of individuals who are creative, curious, sensitive, and enthusiastic about life. They are natural entrepreneurs who love innovation, practicality, as well as giving back to the community. When they are spending time on social media, they follow the Business and Science world, like to have a good laugh and learn about the latest games.

Another common ground of both genders is Science and Technology. This audience deeply cares about scientific developments and tries to be on the radar as much as possible.

Both genders of the audience love to play computer games. However, the tendency is highly strong, especially in 18 to 24 years old males. They are feeling nostalgic with their favorite games from their childhood, while they also play and track the latest games which benefit from the fruits of advanced graphics today.

A strong theme in females’ engaged contents is women empowerment. They are reacting positively towards contents that promote the equalitarian society. It is important to notice that females of this audience also have many “geek” tendencies. They are displaying strong interests inequality, civil rights, science as well as more light-hearted hobbies like computer games. 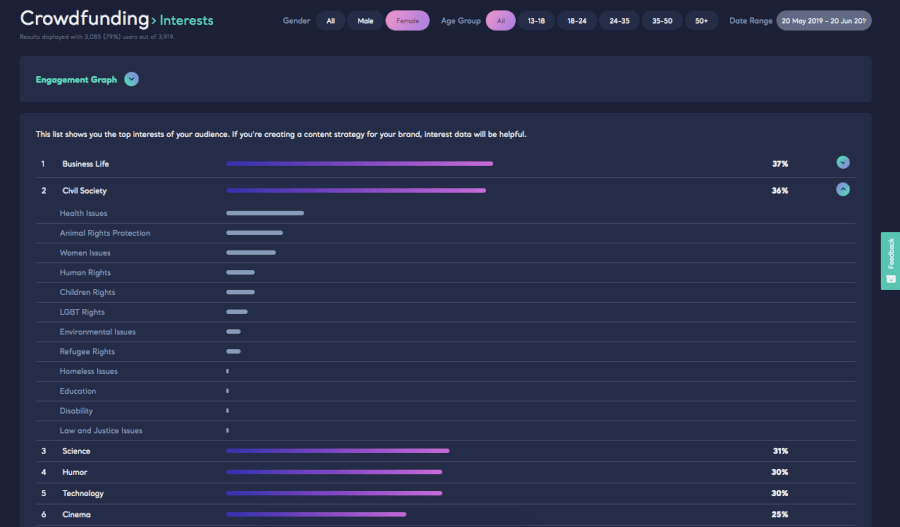 Since the Crowdfunding audience is relatively younger and light-hearted than our other examined audiences, we observe more fantasy, sci-fi, and humor related posts in their TV preferences. In their lists, there are shows such as Rick and Morty, Stranger Things, Doctor Who, The Big Bang Theory and many more that are considered for “geeks”.

Crowdfunding audience is still highly active in terms of keeping up with politics. They are taking an interest in global issues and especially interact with contents which feature “human stories”. They are reacting positively towards inclusive and egalitarian discourses.

They are good trackers at tech and business platforms like Wired, Forbes, and Tech Crunch. Interacting with these accounts, they are motivated by following investment news, reading inspirational stories, learning from success stories, and being informed about innovative products.

We observe important changes when it comes to males’ and females’ brand engagements at the outset. While males and females are both well involved with information and communication brands like YouTube, Twitter, etc., males are more into Automotive and Electronic Items while Textile & Clothing and Cosmetics appeal more to females.

One of the common grounds and an important insight is that both of them are interested in gaming brands like PlayStation, Xbox, and Nintendo.

Crowdfunding audience is composed of highly tech-savvy people who are using the benefits of technology to the last drop. We observe that they have adopted many applications to their daily lives; they are reading Medium stories, listening music from Spotify and Apple Music, using Uber for alternative ways of transportation, watching IPTV through Netflix and Hulu.

We can trace back the geek side of the Crowdfunding audience in their celebrity engagements. Besides technology-based business personalities, we see names and posts related to Harry Potter, Dead Pool, and Avengers. Additionally, the women empowerment theme is strong here as well.

While Advertising & Marketing Influencers and Internet Personalities are the main categories, it is important to keep in mind that there are gaming and makeup influencers in their top 25. Crowdfunding audience, especially the females, are loyal followers of Youtubers. They are regular visitors who like to participate in the lives of these YouTubers.

If you're an entrepreneur and you're trying to spread your campaign, other entrepreneurs might also help you.

Here are the best influencers in the entrepreneurship category for Crowdfunding Audience; 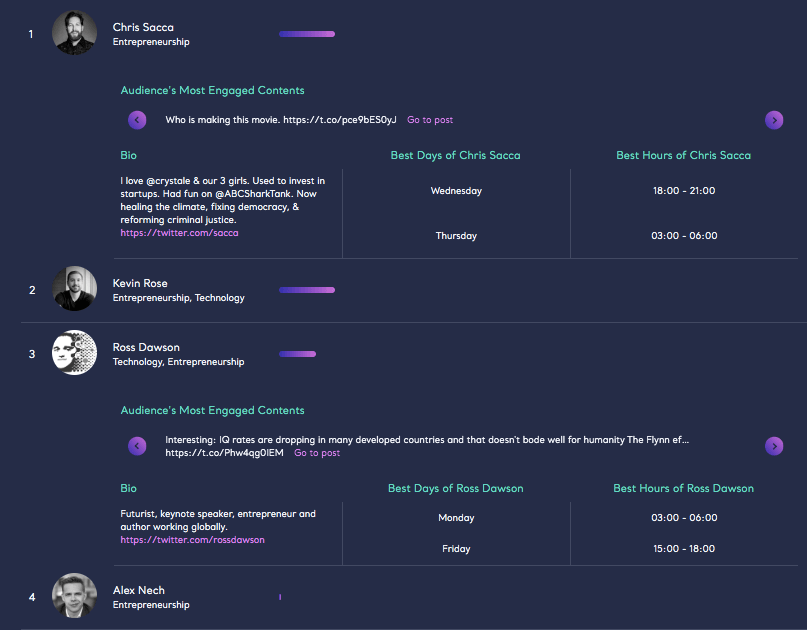 Also, Crowdfunders are so much into Gaming. Here are the Top 5 Gaming Influencers for Crowdfunding Campaigns;

Individuals from the age group of 24 to 35 are much more likely to participate in crowdfunding campaigns; those over 45 are significantly less likely to back campaigns.

The projects they fund differ by their gender. Females fund dance, fashion, and art-related projects, while males are mostly interested in games, high technology, and comics.

It seems like their main motivation depends on the content of the project. Your content should emphasize the creative and innovative part of your product. Because the audience is positively affected by human stories, featuring real people with success stories would grab their attention.

A YouTube channel with light-hearted daily contents would be a nice way of getting in their radar.

Because gaming is a mutual interest shared by genders, placing images from old games would capture their attention - for example when you display an ad with a computer in it, the computer might have a Super Mario wallpaper.

Tech-based platforms can be chosen for advertising of crowdfunding projects. Especially the gaming platforms they love and the IPTVs they watch, all could be suitable for advertising and marketing communication.

Women in your ads need to be intellectual, smart, and a little geek to get these people involved. This is because women are interested in content that promotes an egalitarian society. 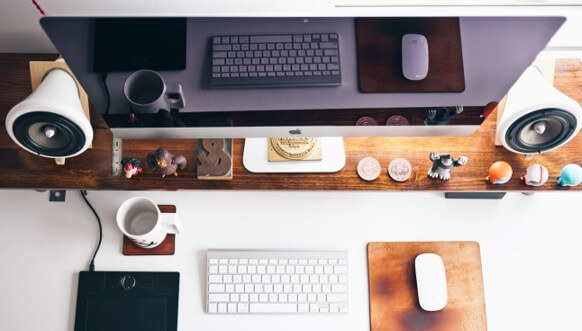 Crowdfunding audience is open-minded, urbanist, technology-oriented, and prone to exploit the opportunities of the Internet overall. They are fascinated by technology and eager to learn more about creative combinations that science and technology bring to our lives. They display many “geeky” interests, and gaming is quite an important part of their lives.

If you want to discover our Social Research Platform and examine other audiences insights, please Sign Up! Stay tuned for further analysis!